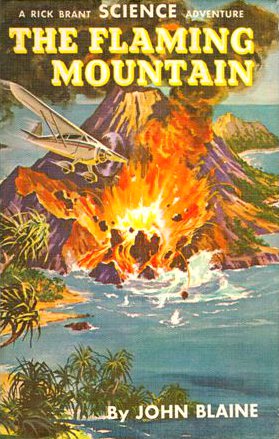 It is hard to believe, but that is what happens on San Luz, a small island off the coast of South America.

When Rick Brant and his pal Dan Scott fly to the famous resort island to join Rick's father, head of the Spindrift Scientific Foundation, a seemingly inactive volcano is about to explode in an eruption which could easily blow San Luz off the map.

The immediate threat is to a small town at the foot of the volcano, where the air reeks with the fumes of hydrogen sulfide and sulfur dioxide, and it is here that Rick and Scotty help Dr. Brant and his scientist associates set up headquarters, in the hope of finding a way of controlling an eruption that is growing into a certainty with fantastic speed.

But their efforts to save the island town are hindered by the superior forces of nature, the superstitious fatalism of the people—and sabotage!

With the earth opening up all around them, Rick, Scotty, and the scientists have little hope of preventing a catastrophe, until a decision is made to unleash the awesome power of atomic energy in a desperate last attempt to fight the volcanic eruption.

Jam-packed with excitement and swift, tense action, The Flaming Mountain has all the elements that have made the Rick Brant Science Adventure series a favorite all over the world…